With 12 hectares of land in the heart of the Po river valley, our land is a real oasis dedicated to organic farming, where the beauty of unspoiled nature, preserved from exploitation, meets the elegance of peasant essentiality and the charm of history.
Today, in this context, almost fossilized in a bygone era, two-row barley, minor cereals and hops find a perfect environment to grow and produce “the good and the right”, according to the primordial rhythms of nature and man, without haste, without forcing. This concept enhances the most modern technical and scientific knowledge and the knowledge of years of experience in the sector. This goal has been reached after about ten years of experimentation: from 2009 the three-year conversion of the farm’s surface to organic farming, together with the experimentation of two-row barley varieties. It was a difficult step, which required the verification of more than 10 varieties of barley, in spring and autumn sowing. Then three years were dedicated to the development of the cultivation system in order to obtain good barley for malt (with technological parameters the exact opposite of those previously pursued), the identification of the most suitable improvement crops for cereal successions, and finally the complete self-production of propagation of plants material. 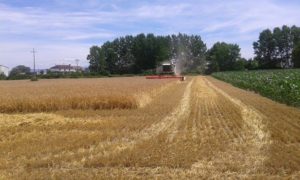 Today three main varieties are grown: Tazio, Bastille and Concerto. Unlike what most cereal farmers do, our choice is to no longer buy any element of our production from third parties, except for the first use, in order to guarantee a 100% in-house beer supply chain, under the control and the direct responsibility of the actual producers. Today, in fact, for the cultivation of distiched barley we only resort to the technique of minimum processing, burying the plant residues of the improved crops and of the threshing of beer, avoiding ploughing and the use of any fertilizer that would cause greater stress to the ground. Sowing involves the use of barley seeds from the previous harvest, properly screened and selected, so as to guarantee the use of plants with genetic characteristics that are increasingly adapted to the environment in which they are grown, year after year. From sowing to harvesting, we only intervene by manually eliminating the weeds that could contaminate the grain at the time of threshing. Nine months separate the sowing from the harvest, in which the small germ of the barley is transformed to give long curved spikes, with long tassels, whose color in the field already recalls that of the future drink to which it will give life.

Alongside the barley plots there are alternate crops of soft wheat, rice and rye, also used as raw materials for some beers, albeit in limited quantities. Also, for these plants the same cultivation methods are used as described for barley, always paying attention to quality and respect for the environment and the consumer.
The conservation of kernels, subjected to a careful cleaning and selection process immediately after threshing, takes place in silos saturated with natural inert food gases (carbon dioxide and nitrogen), so as to guarantee perfect preservation without the use of pesticides and fumigants until the time of brewing.

A vegetable garden overlooking the entrance road and cooled by the river Roggia riale that marks the border to the bridge leading up to the farmhouse, and welcomes guests along with the long fronds of hops, which in the month of August and September fill the air with the essences that are more intense than cones. Although the experimentation of hop plant cultivation only started in 2015, the first crops yielded satisfactory results in terms of quality and quantity for some continental and exotic varieties. To date, about 300 plants are cultivated divided between 7 noble varieties of bitter and aroma: Cascade, Taurus, Chinook, Magnum, Perle, Saaz, Hersbrucker.
Surprisingly, thanks to research carried out along the banks of the river Po and the irrigation canals, the first plants of wild autoctonous varieties were also planted, and are being assessed for their technological peculiarities, with the hope of selecting suitable varieties for use in cooked or dry hopping. Also, for the management of hops the most respectful methods of plant and environment are used: weeding the rows, drip irrigation to limit water consumption and the onset of fungal diseases affecting the plant, resorting to antagonistic organisms in defence of currently rare attacking pathogens. The cones, once collected, are quickly dried at gentle temperatures (35 ° C), and stored in a vacuum and in the freezer, so as to ensure the maximum preservation of the chemical components of the lupulin, so precious for its aromas and flavour.